Usually November is my least favourite month of the year but leading up to it was really fabulous. I was harvesting some of the Jerusalem artichokes last week – and they were fabulous. I grow them at the community gardens in Bundoran, Co. Donegal as well as in Co. Cork. They really grow in all conditions and even with neglect in a marginal climate they produce a good yield. In Cork with some care they yielded 10kg per sqm or 100 tonnes per hectare – the highest yielding crop ever. We also harvested the first yacon plant in Cork – these were grown outdoors and yielded on average 8kg per plant. More info on Jerusalem artichokes and Yacon in the next newsletter.
There are two things I can still look forward to in November – harvesting more yacon, oca and mashua tubers. I need to wait until the frost has killed off the leaves completely and then still wait for another two weeks before harvesting.

Our seed shop is now open. Joanna is there every Tuesday to Friday from 10.00am to 2.30pm. Pop in if you are in the area. We are on Main Street, Manorhamilton, Co. Leitrim.
From January onwards (or possibly even earlier) we’ll stock our own varieties of potatoes which I bred over the last 5 years. We’ll only have a very small quantity available but you can bulk them up yourself. They were selected for good slug resistance, blight resistance and taste. We’ll also have some oca and mashua tubers as well as my collection of Jerusalem artichokes – the crop for the future (an acre of Jerusalem artichokes absorbs more carbon from the atmosphere than a forest). 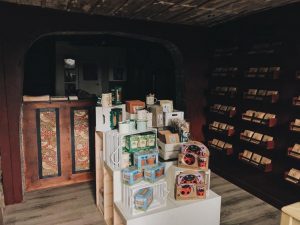 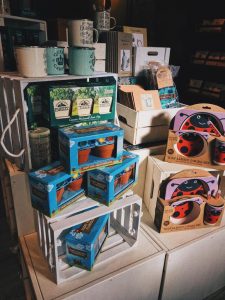 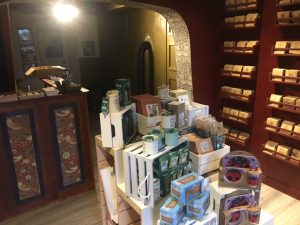 The biological farming conference was an amazing event – well over 300 people attended the two days in Portlaoise. Experts from all over the world came to share their knowledge. About half the participants were organic farmers and growers and the other half were conventional farmers with a keen interest in soil biology. This was very encouraging to see.

I will try and summarise some of Dr. Christine Jones excellent talk on Regenerative Farming and the Soil Microbiome.
95% of life on Earth is in the soil and the quality of our food depends on the relationship of microbes in the soil. Microbes (fungi, bacteria, protists and archaea make up 93% of the biomass of animals on Earth. Soil microbes interact with the roots of plants – that’s called the rhizosphere. This is the area that is most alive – the area around the roots. In a teaspoon of this soil there are more living creatures than there are people on Earth.
So the plants photosynthesize – with sunlight, water and carbon dioxide they make carbohydrates (sugars). These sugars are drawn into the plant and the residues are thrown out in the roots. These little particles are called exudates – and the life in the soil loves them with literally billions of microbes surrounding the roots.

What I wasn’t aware of is the rhizosheath. It’s a sheath of soil particles stuck to the plant root. When you pull up a plant – soil particles should stick to it. This is a really good sign that your soil is healthy and alive. Christine showed that all plant roots are connected with fungal network (mycorrhizae).
All plants have a microbial world embedded within them. When we stand on soil we stand on the rooftop of another world.

Here are the warnings she gave: Never use synthetic nitrogen or phosphorus fertilisers. These take away the jobs from the microbes and thus the whole soil, microbe, root interaction collapses. Christine also stated that excessive use of N and P fertilisers has caused soil degradation, environmental pollution, reduced soil biodiversity and trace element deficiencies in plants, animals and people. She firmly believes that supporting microbes in the soil is far more efficient than using synthetic fertilisers.

Apparently this is very simple:
a. Increase plant diversity
b. Use biostimulants

A simple monocrop system (a field of wheat or even grassland containing only ryegrass) is dysfunctional. She also compared it to the human gut. If our diet is too simplistic we will lose the essential gut microorganism. Apparently ADHD (Attention deficit hyperactivity disorder) is linked with gut health and certain beneficial bacteria are missing. Many current health issues have been linked to a failure to support a diversity of microbes in the human gut. She told us to eat at least 30 different kinds of plant foods per week – not an easy task.
After driving through Ireland in the last week she told us that many areas in Ireland are green deserts consisting of just one plant – perennial ryegrass which is highly fertilised with synthetic fertilisers and that our soils are in danger.

Her recommendations are to increase diversity in plants and include plenty of non-grass species such as yarrow and chicory. This diversity in turn will encourage the soil microbes. She thought there is little point of introducing soil microbes. There are many products available nowadays, but the most important task is to get the plant diversity going first and then use biostimulant. She suggested the following – diluted seawater, milk, fermented seaweed and compost extracts. More on these in the next newsletter.
One more fact: Insects, fish, molluscs, annelids, birds, mammals and humans make up 7% of life forms (in weight) while micro-organisms make up 93% . Humans comprise only 0.01% of the biomass of life on Earth.

The Nuffield Conference takes place in the Castleknock Hotel in Dublin on Friday 18th November with all the present scholars giving their presentation. My presentation is on the Potential of New Food Crops for Ireland.

Cut the crap and cook

My 12-year old son Thien has started a YouTube channel called “Cut the crap and cook”. It’s aim is to show people how easy it is to make delicious and healthy food.
https://www.youtube.com/channel/UCev0Kya4GmabUjYUurNJvBw

I find myself giving out too much recently – so I’m grasping at some good news stories/snippets:

– Austria is set to become the first country to completely ban Glyphosate (Roundup). Pamela Rendi-Wagner stated: “The scientific evidence of the plant poison’s carcinogenic effect is increasing and it is our responsibility to ban this poison from our environment”. Maybe Ireland will follow Austria’s example soon?
https://www.dw.com/en/austrian-parliament-votes-to-ban-glyphosate-weedkiller/a-49450418

– Organic Sikkim – a whole state in India has declared itself organic in 2004 and it was a massive success. Nature could recover and the livelihoods of people improved. The Sikkim state is actively supporting it through research and advances in sustainable technologies. What an achievement!
https://www.sikkimorganicmission.gov.in/success-stories/

– Organic Ireland – imagine if Ireland would become an organic and sustainable country. It wouldn’t take much and the opportunity would be massive.