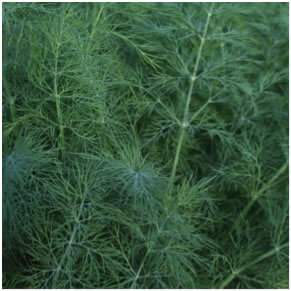 Growing Dill is very quick and easy.  However, if you buy plain dill seeds they are likely to bolt much quicker because the plants are meant for producing dill seeds.

Sow small amounts every 3 weeks from late March until August. It can be sown directly into the ground or it also can be sown into modular trays (5 seeds per cell).

Between rows: 20cm
Between plants in the row: 20cm (5 seedlings per station)

Dill  is rapidly gaining popularity especially thanks to many celebrity chefs extolling its virtues. In addition, dill is also such an easy and fast herb to grow.  Therefore, you can expect the first harvest about 8 weeks after sowing.  It is a very short-lived annual. The fancy botanical term for this is ‘ephemeral’. This means that you have to sow small amounts of it at regular intervals so the choice of variety is crucially important. However, normal dill seed is quite unsuitable for leaf production, thence, are only good for growing dill seeds. For leaf production you have to choose a named variety that is slow to bolt. This may be the simple explanation why some gardeners are unsuccessful with dill.

Dill grows in any reasonably fertile soil with a pH of 6-7. Unlike many other herbs it can even be grown in semi-shade. Small amounts of well rotted compost can be dug into the soil prior to planting.

For continuity you can sow every two to three weeks from mid February until mid August. However, plants that are ready in May to July should be planted outdoors. All other sowings can be planted in the tunnel or greenhouse.
The very early sowings in February and March should be done in modular trays and placed on a heating bench at 18ºC. I generally sow a small pinch of seeds (about 5 –7) per cell. The seedlings are not divided when planted out about 4 weeks later.
Also, later sowings can either be made in modular trays or sown directly into a well prepared fine seed bed.

It is important to keep dill growing steadily because it is prone to bolting. This can be achieved by keeping the soil moist and the tunnel or greenhouse well ventilated.

With successional sowings you can expect to harvest dill from April until mid October. You can either pick individual leaves if only small quantities are required. Alternatively you can use the cut-and-come-again technique.
You can expect to get two to three good cuts per plant. As soon as the new batch is producing well it is best to discard the older ones.

Dill grows quite healthily throughout most of the year. Only the early and very late sowings may develop some moulds.

How much to grow?

You will get 24 plants (groups of 5-7) per square metre. Each group may yield up to 30g. Therefore, sowing three cells every two to three weeks should be adequate for a family’s needs.

As mentioned above it is absolutely crucial to choose the right variety. I have always grown the variety ‘Dukat’ which is very slow to run to seed.

For more information have a look at my monthly newsletters on:

For information on organic certification: